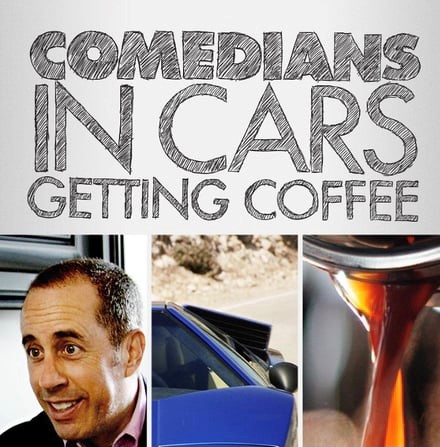 Comedians in Cars Getting Coffee (2019)

Comedians in Cars Getting Coffee is exactly what it claims to be, a show featuring comedians going for a drive and chatting over coffee. Hosted by stand-up comedian and the brain behind Seinfeld, Jerry Seinfeld, the show is full of dry humour, hilarious reminiscing and odd musings over everyday themes.

Seinfeld has tapped into his many friendships and his love for classic cars to put together a really enjoyable show. The episodes are only about 15 to 20 minutes long so for this non-Seinfeld fan, it’s a nice little break from the heavier content I usually enjoy.

Each episode opens with an in-depth description of the car for the episode. Seinfeld goes into detail about the motor, the make and the era when each car was built. And while I am not a car person at all – I describe my vehicle as a blue family-mobile when it is, in fact black but that is a whole other issue – I can appreciate the fascination Seinfeld has with the intricacies and history of each ride.

One interesting element of the car segment is Seinfeld chooses each car for the episode with interviewee in mind. It is fascinating to see how Seinfeld’s choices reflect of his relationship and perception of the person in the passenger seat. For instance, when interviewing Jim Carey Seinfeld chose a quirky 1976 Lamborghini with surprisingly artistic line and for his chat with Last Week Tonight host John Oliver Seinfeld showed up in a very British, impractical but fun, 1959 Triumph.

The conversations transcend the cars though to include some very telling and wonderful moments of connection that reveals the friendship and personality of both Seinfeld and who he is interviewing. One unexpected delight of this series is how thoughtful Seinfeld is in planning these coffee dates. In his episode with actress Sarah Jessica Parker they visit a retro diner that evokes a flood of childhood memories for Parker that are just delightful to listen to and with Seinfeld’s time with late night host, Jimmy Fallon, he takes Fallon out in his boat just for the pure joy of the experience.

There are six collections available and each one has a different theme and feel but each as delightful as the next. Whether Seinfeld is sitting with the current crop of late night hosts or the queens of comedy or the old guard of Hollywood, he is able to swing from the ridiculous to the poignant and back again without missing a beat. He offers encouragement and camaraderie, and occasionally commiseration, with each of his guests in such an authentic and unassuming way. In the end, even this Seinfeld non-fan finds him surprisingly charming and delightfully intriguing.

There are a ton of episodes of Comedians in Cars Getting Coffee so it makes an excellent pick for a coffee break watch or a night of light-hearted binge watching. Well done, Seinfeld. This one’s a winner.