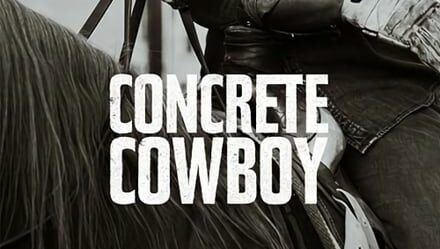 Did you know that there is a long history of Black cowboys? And did you further know that inner-city horsemanship is a big thing in some U.S. cities? Because until I watched Concrete Cowboy, I had no idea about either of those important cultures.

Concrete Cowboy is a film adaptation of Greg Neri’s novel Ghetto Cowboy. The novel, in turn, is inspired by the very real Fletcher Street Riding Club. This club helps youth in the city learn to ride and take care of horses, and it is part of that legacy of Black cowboys that I mentioned. It’s an emotional and moving story, brought to life by super-talented actors Idris Elba and Caleb McLaughlin.

Caleb stars as Cole. He’s an irritated teen whose mother sends him to spend the summer with his dad, Harp (Idris Elba). Cole is furious. He doesn’t want to stay with his dad who barely has any food and seems to care about horses more than him.

Tempted to embrace the street life with his friend Smush (Jharell Jerome), Cole grudgingly agrees to learn how to work in the stables. He learns how to muck stalls and use a wheelbarrow, and he also learns that he likes horses.

After a crushing loss, Cole struggles to remember who he is. With the support of a community behind him, he just might manage to keep himself together — and develop a real relationship with his dad, too.

I will say — this was a gorgeous movie that I liked very much. And yet, I was disappointed to find that both screenplay writers were white. I think that this article does a great job elaborating why this is less than ideal.

There was still lots to love, though!

Mr. Elba is incredible in this movie, as per usual. He brings depth and nuance to his character, who might otherwise slot easily into the “deadbeat dad” category. Harp is real and flawed and frustrating and lovable. We can’t totally support him, but we can’t villainize him either. I love it!

Caleb McLaughlin also puts in a fantastic performance. Cole is a lost and confused and angry teenager. Everything that he feels, you feel with him. I had only ever seen Caleb as Lucas in Stranger Things and I was impressed with his dramatic acting chops.

Also, a lot of the secondary characters were played by real life Fletcher Street Riders. A memorable montage of those riders talking about the ways in which Fletcher Street has improved their lives plays over the credits. It’s heartwarming and beautiful.

Concrete Cowboy is well worth your time if you want to watch some great acting, some pretty horses, or learn more about Black cowboys. In other words, I recommend it.