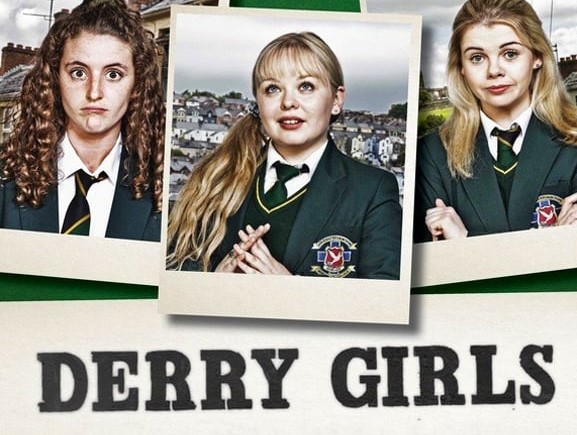 What do you get when you mix teen girls. 1990s fashion and a country in conflict? bet you wouldn’t say a delightful comedy! But that is exactly what Derry Girls has to offer and it is hilarious!

The series centers around a group of teen girls (and one unwanted English cousin) in Derry, Ireland during a period of time known as “The Troubles.” The backdrop of political unrest makes the daily struggles of teen life for this band of misfits even more ridiculous and yet entirely relatable. Whether they are begging for mercy after offending the local chip shop owner or taking on the head nun at their all girls Catholic school, this tight group of friends are sure to create chaos wherever they go.

The lead characters are written with such wit and compassion that they seem just like the girls you knew from high school. Erin (Saoirse-Monica Jackson) is earnest, studious and yet habitually tragic in her teen angst. Her slightly odd cousin, Orla (Louisa Harland) lives with Erin, her parents, grandfather and aunt and the girls attend school together. They are friends with the skittish Clare (Nicola Coughlan) and Michelle (Jaime-Lee O’Donnell), the rebellious and devilishly witty alpha-female. Oh, and Michelle’s unwanted cousin, James (Dylan McLlellan) from England is part of their crew and attends the girls’ school with them. Together, they navigate the minefield of emotions and decisions that is the teen life.

Created and written by Lisa McGee, Derry Girls is full of real life emotion and quirky teen mishaps. It is reported that McGee pulled content from her own life, as a teen girl coming of age in the midst of political strife. When the show debuted, viewers became instant fans because of how McGee normalized the experience of growing up in Northern Ireland during the 90s. Both Catholics and Protestants have found the show, and its lead characters, endearing and true.

Derry Girls has had the highest viewers of any show in Northern Ireland in nearly 20 years. It has inspired a book, a mural and has received a slew of awards for best series, best comedy, best writing and best lead actress in a series. In just two short seasons, the show has developed a cult-like following in Ireland, the U.K. and across the world. The show’s heartfelt and cheeky approach to topics that are current to today’s culture and climate yet fit so seamlessly in the scope of the 1990s setting of the series is no doubt to be credited for this success.

Be sure to block off some time to binge this wonderful series and stay tuned for info on the release of the third season!