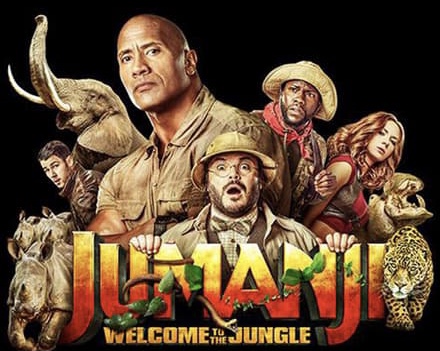 Settling on a pick for family movie night can be a nightmare, especially if your family has very different tastes in films. But Jumanji: Welcome to the Jungle just might be the crowd pleaser you are looking for!

This fantasy adventure comedy film picks up where the 1995 Jumanji film left off – sort of. It’s 21 years later and a group of four high school students discover an old video game in the basement of their high school. No sooner do they turn the game on then they are sucked into the game itself and find themselves unrecognizable as the game’s avatars. Each avatar has a special skill and all skills are needed if this group of teenagers is going to survive the game and make it home.

The cast of avatars makes this movie. Dr. Xander Bravestone, the adventurer and archeologist, is played by Dwayne Johnson opposite Kevin Hart’s portrayal of the bookish zoologist Franklin “Mouse” Finbar.  Karen Gillan is martial arts expert, Ruby Roundhouse and Jack Black fills the role of cartographer, Dr. Sheldon Oberon. The thing that makes this magic though is these actors are portraying other actors as these avatars. So while Johnson, Hart, Gillan and Black are bantering back and forth as the avatars they are also using the inflections, body language and conflicts of the four high school students played by Alex Wolf, Ser’Darius Blain, Madison Iseman and Morgan Turner.

While completing the levels of the game, the group faces an array of challenges and near death experiences that are both nail biting and hilarious. Part way through the game, the adventurers come across another avatar, pilot Jefferson “Seaplane” McDonough, inhabited by Alex (Nick Jonas), another student who had been trapped in the game since 1996. The teens piece together Alex’s story and realize he’s the missing kid from a rundown house in their neighborhood. While rumors had circulated for years in regards to his disappearance no one had an inkling of what the real story was. Together, the five avatars pledge to leave no man or woman behind and get them all out of the game.

The comedic energy of Johnson, Hart, Black and Gillan is on point. Jack Black tapping into his inner teen-age girl is as funny and perfect as you’d expect. Kevin Hart and Dwayne Johnson are excellent as they banter, jibe and humiliate each other throughout the film. Karen Gillan’s comedic prowess is delightful and engaging to watch.

Jumanji: Welcome to the Jungle has a pg-13 rating for its adventure action, some suggestive content and mild language. Our teens and tweens thought this flick was hilarious and while some of the jokes were a little off color they weren’t deal breakers for us.

This film lives up to the bar Robin Williams set in the original Jumanji movie with humor, jump-scares and a few whole-hearted fell good moments. The cast is wonderful, the script is equal parts funny and action-packed and the location is breath-taking. It all adds up to a thoroughly engaging film and a big family movie night win!