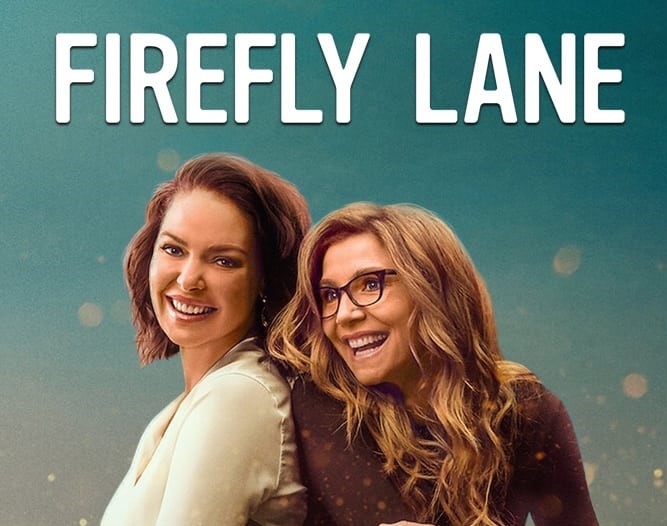 If you are expecting a run-of-the-mill, gal-pal series when you tune into watch Firefly Lane then you need to readjust your expectations. This Netflix original is nothing like I expected and everything I didn’t know I was looking for in a binge watch.

This series is based in Kristin Hannah’s book of the same name and brought to the small screen by Maggie Friedmann as is filled with absolutely divine characters. The story is more than a tale of two friends, it is a revelation of what it takes to come into your own as a young woman during a time in history when women were smashing glass ceilings and challenging gender roles. It is the story of us, us Boomers and Gen Xers – and it is wonderful.

Tully and Kate meet in the 1970s when Tully and her addicted, troubled and erratic mother move into the house across from Kate and her family on Firefly Lane. Kate is a studious, awkward yet sassy 14-year-old and Tully, though the same age as Kate, seems infinitely cooler and worldly than her. The two bond quickly over shared secrets and schoolgirl shenanigans. Their connection only deepens as they share their real-life challenges, heartbreaks and hopes.

The series follow their deep yet complicated friendship through a series of flashbacks. The series bounces back and forth from the 1970s to the mid 1980s and the early 2000s and back again. Through college, marriage, loss, grief, success and betrayal Tully and Kate find a way to stay connected and present for each other.

The difference maker in this series is the combination of impeccable representation of each decade, expertly scripted scenes and the high caliber of acting throughout the series. Katherine Heigl and Sarah Chalke carry the series with effortless chemistry and a beautiful balance of humor and deep, authentic emotion. The three young actors who portray Tully (Ali Skovbye and London Robertson) and Kate (Roan Curtis) in earlier decades do a brilliant job of developing the lead characters into women the viewers not only identify with but genuinely like.

Heigl outdoes herself in this series. She has grown well past the inconsistent Izzy Stevens of Grey’s Anatomy and has finally found her rhythm as a well-rounded lead. She brings a rich humanity to Tully that saves this self-obsessed character from being a cliché. Instead, we find compassion and understanding for the complicated Tully.

Chalke, though, is not to be outdone. She fills the screen and steals every scene with her girl-next-door charm and her genuine devotion to her life-long pal. Kate is strong and witty and smart and a wonderfully delicious character to absorb through Chalke’s subtle yet divine portrayal of her. Ben Lawson, as Johnny, and Beau Garrett, as Cloud, also deserve recognition for their own wonderful contributions to this memorable series.

There is something truly exceptional about those Firefly Lane girls. They, like the series that hosts them, never try to be anything other than who they are. They are entirely unique, delightful and captivating. I promise you, one season is not nearly enough. Netflix, are you listening? We want more!