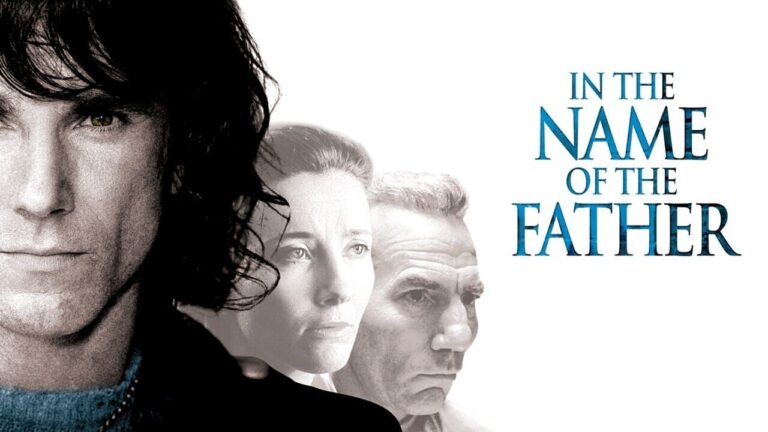 I was in high school when I joined a few friends at the theatre one Saturday night. I had no idea what we were seeing and therefore I could not be prepared for the paradigm shifting experience that night held. The movie was In the Name of the Father.

In 1974, four young adults were arrested, charged and found guilty of a terrorist attack on a pub in London, England. At the time, the tensions between Northern Ireland and England were boiling over. There were daily conflicts between civilians and the military on the streets of Belfast and the anti-Irish rhetoric in England was rampant. In the midst of this, one careless 20 year old Irish man arrived in London.

Gerry Conlon (Daniel Day-Lewis) had been getting into scrapes with the IRA in his hometown of Belfast. he was a petty thief that drew too much attention from the British Army. After a close call with the IRA, which he narrowly escaped due to his father, Giuseppe (Pete Postlethwaite), Gerry was sent to London to live with his aunt while he sorted out his life a bit.

Instead of getting on the straight and narrow, Gerry met an old school friend, Paul Hill (John Lynch), moved into a hippie commune and robbed a prostitute. Shortly after this misadventure, Gerry returned to Belfast with a pocket full of cash and a few stories to tell. Little did he know, the night he was thieving, a bomb had been detonated a few miles from him in London, killing five people and injuring many more.

Gerry, Paul, and their friends Carole Richardson and paddy Armstrong are arrested and charged with being the primary attackers. Giuseppe, his sister and nephew are also arrested as accessories to the crime. All are sentence to jail time though none of them were involved with the terrorist attack. In the Name of the Father is the story of how a son and his lawyer move mountains to reveal systematic corruption to save an ailing father.

Based on a true story, In the Name of the Father is a compelling story about justice, love, truth and the belief in redemption. Emma Thompson appears as Conlon’s attorney, Gareth Pierce. She does a brilliant job setting the tone of the film and providing an intimate perspective on the efforts of justice.

Daniel Day-Lewis was brilliant as Conlon, of course. His intensity and chemistry with Postlethwaite is stunning. He brings the depth of the struggle for justice to the screen with realism that draws you into the story without overwhelming you. He cares about the story and makes you care, as well.

For more than 25 years, In the Name of the Father has been a favourite flick. It’s a story that holds and an issue that deserves our careful attention. Be sure to watch it, streaming now on Netflix.