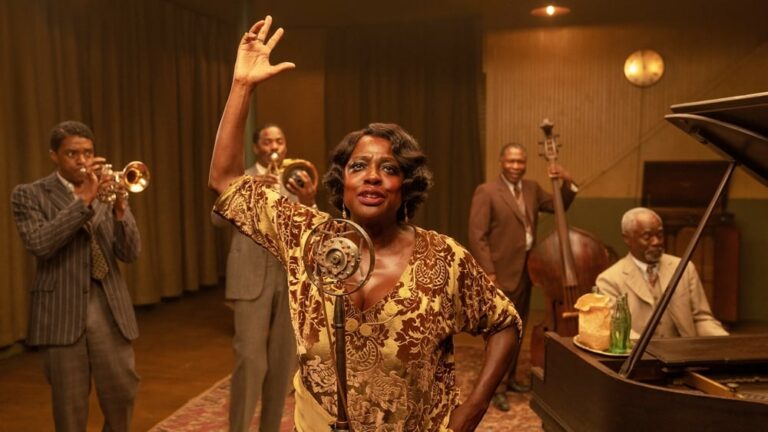 Ma Rainey’s Black Bottom famously stars Chadwick Boseman in his final role. It was released on December 18, 2020, which was about four months after Chadwick Boseman’s tragic death. It was truly special to watch this movie knowing that it was his last time onscreen.

George C. Wolfe directed this movie and Ruben Santiago-Hudson, who wrote the screenplay, based it on a play by August Wilson. You can tell, because the film feels like a play in the best possible way. The action is contained to a few select rooms, and the vibrant performances of this phenomenal cast keep the film feeling lively and entertaining.

Ma Rainey’s Black Bottom follows a chaotic and troublesome recording session set in 1920s Chicago. Gertrude “Ma” Rainey (who was a real person and is portrayed in this movie by Viola Davis) has plenty of expectations when she arrives at the studio. A studio executive, Sturdyvant (Jonny Coyne), seems inches away from asking her to leave. The fact that although Ma has many demands she has even more talent stops him.

Levee Green (Chadwick Boseman) is an ambitious young trumpeter who also possesses talent in spades. His awareness of that fact leads him to present himself in a way that grates on his fellow musicians, who find this overconfident young musician a bit off-putting.

True to a film based on a play, there isn’t much “action.” The film consists mostly of dialogue and interaction, and it is stunning as a result. Viola Davis and Chadwick Boseman both deliver dazzling monologues, and the reactions of other characters to their strongly worded opinions are both entertaining and unnerving by turns. In every case, this movie is engrossing and beautiful because of the acting.

While everyone’s performances are magnificent, Chadwick Boseman truly shines. His Levee is nothing short of captivating. He is aware of injustice and furious about it. He is also young and inexperienced, so no one will listen to him. Boseman is brilliant as he portrays a frustrated, energetic, earnest, and angry man, who wants a place in the world and doesn’t know how to claim it.

Viola Dais’s Ma Rainey is a fabulous counterpart to Levee. She knows what she wants and she;s not afraid to take it. She inconveniences the studio, the executive, and her manager, and offers no apology. Ma is also aware of injustice. When she takes what she wants, it is a form of reclamation. She’s a talented Black woman that knows her worth and accepts nothing less than what she deserves.

Ma Rainey’s Black Bottom is a breathtaking piece of art that explores injustice and emotion while celebrating the Blues. It is upsetting in places and it’s extra important because of those upsetting moments. I wholeheartedly recommend it.