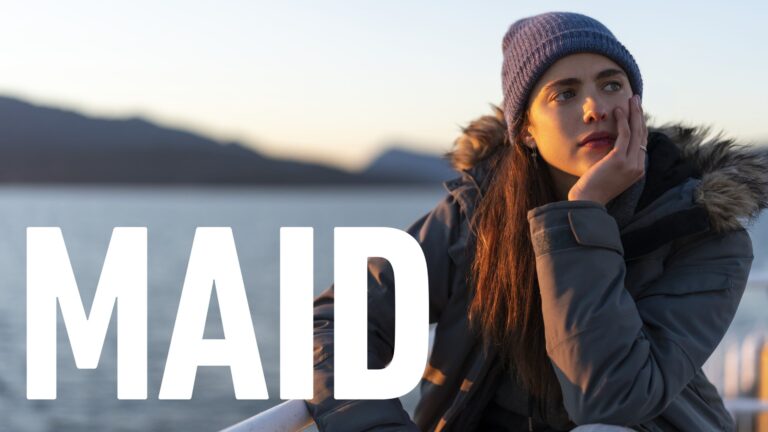 A woman embarking on a new path to independence and self-sufficiency following a narrow escape from an abusive relationship finds herself engaged in a daily struggle to find her footing on her own. Netflix’s newest limited series, Maid, tells the story of Alex and her hard-fought journey.

Based on Stephanie Land’s memoir, Maid: Hard Work, Low Pay and a Mother’s Will to Survive, this series examines the complicated route women emerging from abusive relationships take when setting out to rebuild their lives. Adapted for screen by Molly Smith Metzler, Maid is full of complexities and frustrating yet entirely relatable false starts as main character, Alex (Margaret Qualley), struggles to find her way on her own.

Part of Alex’s journey involves getting employment for the first time since becoming a mother. Alex discovers that finding a job and shelter and childcare all seem like insurmountable obstacles after years of being controlled and manipulated into isolation. While several people offer help and support, ultimately, its up to Alex if she will sink or swim on the road to independence.

Maid is an engaging and compelling watch. Well acted performances from well written material is only one element of this intriguing series. The realism in the portrayal of the complicated issues and the difficult systems that face women who are looking for support and independence from abusive partners has been both liberating and triggering for viewers who have walked a similar road.

This series does a brilliant job in highlighting the subtleties of abuse and the effects of gaslighting that so many women face. There has been broad discussion, since the release of this series, about how authorities and frontline support workers interact with and support. Whether through anecdotal reports or from documented statistics, it is plain to see that more help and understanding is needed to adequately assist women who find themselves on the start-line of a new chapter.

Maid is a compelling watch and a step towards greater understanding of the broader issues that surround the reality of abuse and recovery.