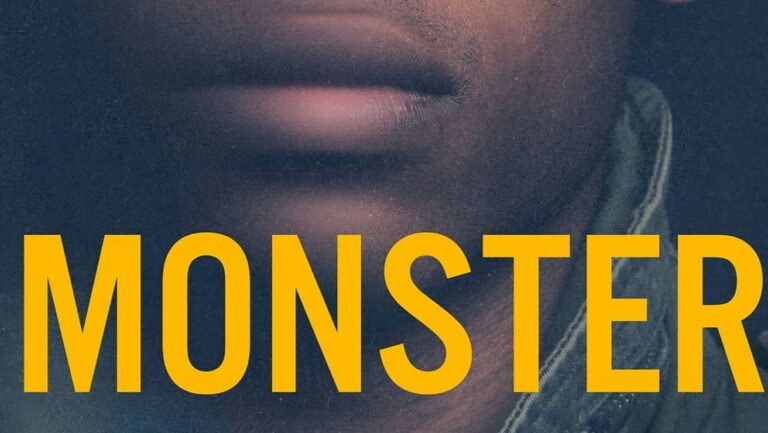 So you see someone on the news under arrest, is he guilty or is he innocent? Is a just a person stuck in a moment or is he a villainous monster preying on the innocent? Does it make a difference if he is white or if he is black?

Monster is a court drama that centers on a 17 year-old black teen from New York. He is arrested and charged with robbery and being an accessory to murder in the course of the crime. The prosecutor calls him a monster. The jail guards treat him as less than human. His fellow inmates see him as just another black kid behind bars. But who does Steve Harman see himself?

Harman (Kelvin Harrison Jr) narrates his experience and compares and contrasts his present situation with the creative, thoughtful kid he was before his arrest. He reflects back on how he came to be in front of a bodega at the moment the owner was killed during a robbery and all the decisions he made that led up to that moment.

He was an artistic kid with a camera and then he was on trial for murder. That is the short story. The longer story is one of racism, discrimination, half-truths and naïve curiosity. In the end, he is just a 17 year-old kid whose life hangs in the balance after a moment, distracted by the light, and months of being plunged into the darkness of the New York State criminal justice system.

Monster is an intriguing and heart wrenching look into the mind and experience of young black men in America. True, not all young black men end up arrested for robbery and murder but far too many of them are looked at with suspicion and prejudice – whether they have done something wrong or not. This is the crux of the theme of this movie.

Based on Walter Dean Myers novel of the same name, Radha Blank developed the screenplay for Monster then turned it over to the capable hands of director, Anthony Mandler. From there the cast of gifted actors including Kelvin Harrison Jr, Jennifer Hudson, Jeffrey Wright and Rakim Mayers, turned words on page into a deep truth where art reflects life.

This is an important film to watch, to breath in and to feel the weight of the truth it carries. With all good and important art, Monster calls on the viewer to examine their own bias throughout the film, as the story unfolds.

Be sure to set aside some time to check out Monster on Netflix.