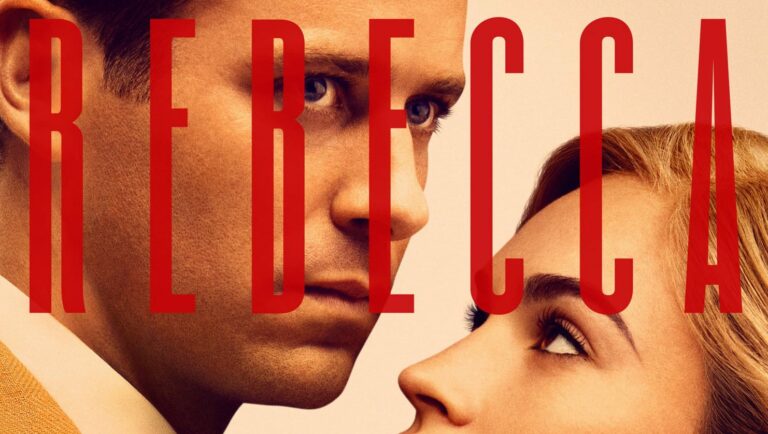 I’m a fan of Lily James, so the second I saw her in the trailer for the new adaptation of Rebecca,  I added the film to my watchlist — even though I’d never so much as heard of the Daphne Du Maurier novel. In the interest of being informed and aware (mostly of whether or not I should be bracing for jump scares), I read the book. I learned later that I could have watched the 1940 Hitchcock adaptation, but the reflections I have to offer are inspired by the novel rather than the black-and-white film.

Here are the basics for anyone who doesn’t know the story: An unnamed young lady, played by Lily James, is on vacation in Monte Carlo with her employer and sort-of guardian, Mrs. Van Hopper. They encounter Maximilian de Winter (Armie Hammer), a wealthy widower and owner of Manderley, a sprawling English estate. Mrs. Van Hopper falls ill, giving our protagonist lots of time to spend with – you guessed it – Mr. de Winter. They marry after a very brief courtship, and Mr. de Winter whisks his young bride off to Manderley. The new Mrs. de Winter finds it difficult to settle into her new role as mistress of the house. Her struggle to fit into life at Manderley is exacerbated by Maxim’s refusal to tell her anything about his first wife, the titular Rebecca. The hostility of Mrs. Danvers, the housekeeper (brilliantly portrayed by Kristin Scott Thomas), doesn’t help either. Mrs. Danvers seems to resent the second Mrs. de Winter for taking Rebecca’s place, and what is with that creepy boathouse?

That’s about all I can tell you without spoilers.

Rebecca is not a scary movie. Disturbing, maybe. Unsettling. But not scary. The book was gripping, and the trailer bordered so strongly on horror that I thought, “ooh, here comes a thriller.” Alas, it was not. As a matter of fact, this Rebecca might be called an anti-thriller. A few scenes led me to believe that some adrenaline rushes might be forthcoming, but I was more or less disappointed (and a bit relieved, I’ll admit) every time. If you are looking for a Halloween movie that will give you chills, this is not it.

And then there’s handling of the story itself. Just as I was starting to feel really impressed by the film’s adherence to the book, there were some major and unwise changes to the plot, and I became less impressed with Ben Wheaton’s adaptation.

The scenery, cinematography, and costume design don’t quite make up for the ways this film disappoints, but they’re stunning enough to go a long way. The winding roads and bright colours are breathtakingly lovely. As a passionate lover of pretty things, they did a lot to nurture my goodwill.

In summary, this Rebecca probably isn’t worth your time if you’re looking for a scary movie. Or a thrilling one. Or, you know, one that’s engaging enough to keep you from nodding off during the talking bits. On the other hand, it’s not bad enough for me to thoroughly condemn. If you want to watch something that’s incredibly (except for the squeal-worthy dresses and the gorgeous Monacan countryside), give it a whirl and see what you think.