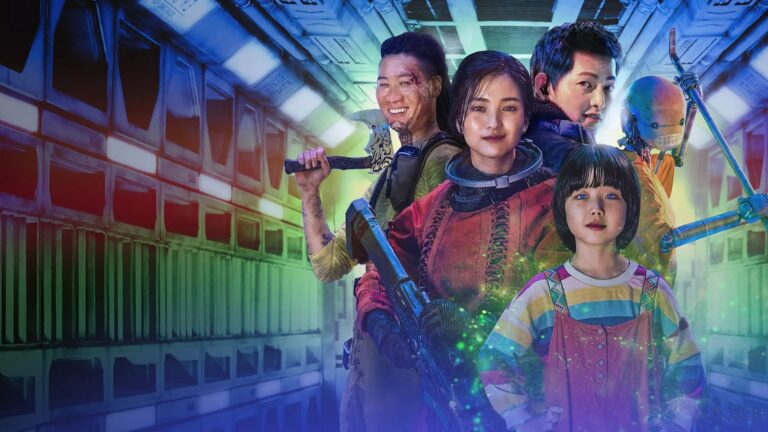 If you’re a fan of action movies, or space movies, or sci-fi movies, you’ll like Space Sweepers. If you enjoy all of those, you’ll love it.

The story begins in 2092, where the earth and its resources have been depleted and humanity has moved to the stars. James Sullivan has created an outer space empire called UTS. The company offers residential areas where people can live in paradise, as long as they can afford it. For the rest of humanity, existence has narrowed down to surviving in whatever ways they can. Since jobs are scarce many have turned to space sweeping — essentially waste management, except that the waste is in space.

The crew of the sweeping craft The Victory — Tae-ho, a man on a mission (Song Joong-ki), Captain Jang (Kim Tae-ri), stoic Tiger Park (Jin Seon-kyu), and the robotic Bubs (a tag-team performance by Yoo Hae-jin and Kim Hyang Gi) — are all simply trying to stay afloat in this cruel, cold world. When they accidentally acquire a dangerous, potentially deadly android disguised as a toddler, their objectives change. What follows is an entertaining space adventure as the crew tries to make themselves some money and save humanity at the same time.

While the plot is a bit basic, I thoroughly enjoyed the film. It’s clever, there are satisfying character arcs, and there’s an adorable robot baby, but there are also lots of languages!

It always irks me when a filmmaker is apparently unaware that there are languages other than English. Sci-fi, in particular, seems to enjoy sporting either English with accents or entirely made-up languages. Not so with Space Sweepers. Since everyone came from earth but need to be able to communicate, there are translators, so each character simply speaks their mother tongue. We, the audience, are able to keep track of what’s happening through the magic of subtitles. I am a big fan of languages, and this linguistic representation made me very happy.

I’m also a fan of cute children, and of tough guys having their hearts melted by cute children. We get both of those things in Space Sweepers. The crew of The Victory are all hardened by the life they lead. Sentimentality ranks low on their list of priorities. Little by little, though, Dorothy manages to worm her way into their hearts, until the rough-and-tumble crew looks more like a family.

And don’t even get me started on the cinematography. Byun Bong-sun somehow struck the perfect balance between outlandishly impressive and completely believable. The spaceships and stars and residential areas and robots are all beautifully done. I felt like I could step through the screen and into space.

Yet another aspect of Space Sweepers that I enjoyed was its delicacy. I don’t know when I started thinking of “action” as synonymous with “graphic,” but I do know that I noticed the lack of gore. Although the characters have more than their fair share of blood and bruises, the filmmakers chose to censor the actual moments where our heroes are wounded. People are shot, stabbed, and burned, but it’s all offscreen, and I, for one, appreciated it.

The healthy helping of explosions and sci-fi violence keep me from calling it a family movie, but overall Space Sweepers is a wholesome, heartwarming film that I’d say is well worth your time.