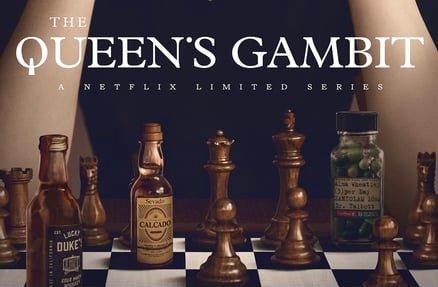 At first glance, a series about a chess-playing orphan doesn’t sound all that captivating but halfway through the first episode I was completely hooked.  Based on the Walter Tevis 1983 novel of the same name, this limited series touches on the themes of loss, addiction, power and feminism against the backdrop of the 1960s competitive chess scene.

The series opens in 1967, where an adult Beth, addicted to tranquilizers and alcohol, stumbles into an important chess match late and hung over.  The scene cuts away to the car accident that makes Elizabeth Harmon an orphan at age nine, a frequent flashback that Beth wrestles with throughout the series.

At the orphanage, young Beth is introduced to tranquilizers and chess at almost the same time and develops an addiction to both. An unlikely connection grows between Beth and the orphanage’s custodian when she persuades him to teach her about chess. Over time she proves herself as a prodigy and draws the attention of the local press as she dominates the local high school chess club. It is at this time when Beth is adopted by a childless couple on the brink of divorce.

Though she is removed from her first teacher, Beth’s drive to compete in chess is not diminished. Not long after her adoption, Beth’s parents get divorced. Alone with her depressed mother, Beth rediscovers tranquilizers and chess. Her addiction grows at the same rate as her chess success, which eventually land her right where the series began, playing chess at the world’s while hung over and strung out.

The brilliance in casting Anya Taylor-Joy (adult Beth) and Isla Johnston (young Beth) is evident within minutes of the opening of the first episode. Both actresses have similarly expressive eyes and a hauntingly placid demeanour. Their ability to communicate their loneliness and solitude, even when surrounded by others, gives a depth to the character of Beth that saves her from being an orphan cliché.

The addition of a stellar supporting cast which includes Moses Ingram (Jolene), Thomas Brody (Benny Watts) and Bill Camp (Mr. Shaibel) takes this series to the next level. Each cast member fills the screen with nuisance and subtle brilliance. Each role was expertly filled, but none so perfect as Marielle Heller as Beth’s adoptive mother, Alma Wheatley. Her portrayal of a desperately lonely 1960s housewife has a surprising depth that leaves the viewer feeling unexpectedly connected to Alma.

This series was filmed like it was meant for the big screen with lighting and cinematography than enhances the retro feel of this 1960s era drama. The attention to detail in each set is impressive. From the dark and shadowy orphanage to the coordinated patterns of the homes and hotels of the 1960s, each set compliments the time and feel of the scene perfectly. The only thing that outdoes the sets is the costumes. Eye-catching doesn’t even begin to describe the fashion feast that is The Queen’s Gambit.

Beth’s infatuation with fashion begins on her first day of public high school and continues throughout her rise in the chess world. Beth becomes a sleek trend-setter as she matures through this series. Her colourful and stylish wardrobe is a standout of all the suits she faces in the male dominated chess world but Beth’s fashion choices go beyond enjoyment and cross over into addiction, like the other great loves of her life (chess & tranquilizers).

Beth amasses a wardrobe full of Pierre Cardin, Dior and their fashion contemporaries as her success grows. This also becomes her downfall and she finds herself broke and unable to raise the entrance fee to an important tournament in Moscow. In the end both Beth and her decadent wardrobe find their way to Russia.

The Queen’s Gambit is the most binge worthy series to come along in a while. It was a Sunday well-spent the day I stumble across this chess playing wonder. The story is well-paced, interesting and the characters are believable yet wonderful. Set some time aside and devour this Netflix limited series as soon as you can. The Queen’s Gambit does not disappoint!