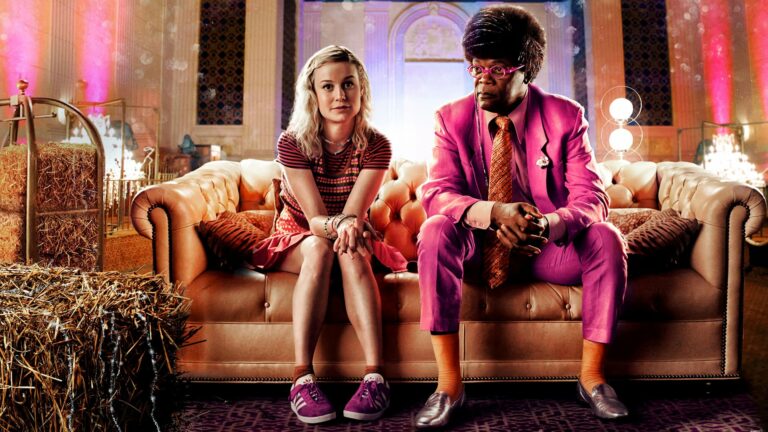 Brie Larson. Magic. Unicorns. So much emphasis on staying true to yourself in a world that wants you to change. You can find all these things and more in Unicorn Store.

It takes the film less than a minute and a half to make us incredibly aware that Kit (Brie Larson’s character) wants nothing more out of life than her very own unicorn. She paints and thinks and lives in rainbow. Unfortunately, the big bad world feels differently about copious amounts of glitter, and Kit is unceremoniously kicked out of art school. Living at home in her parent’s basement, working a temp job she hates, Kit is feeling miserable and hopeless — until, that is, she gets an invitation to the Unicorn Store. Upon her arrival at that most serious place of business she meets the Salesman, played by Samuel L. Jackson, who informs her that not only are unicorns real, she can have one. There’s only one catch: she has to prove herself worthy of that great privilege. Her ensuing attempt to do so is hilarious, endearingly cringy, and altogether heartwarming.

Despite my love for this film, I have to recognize that it is flawed. A lot of this could be blamed on the protagonist. Kit is idealistic and naive, and can be surprisingly selfish. She’s also quite childish; she tends to revel in life in a way that might be painfully embarrassing for actual adults. (Although for people like me who still talk to stuffed animals and jump in rain puddles, it’s delightfully refreshing.) And besides Kit’s dubious likeability there’s the actual feel of the film to consider. At times it’s just plain weird. Its humour is quirky, its costume and set design is colourful (overwhelmingly so, at times), and dialogue can feel a bit stilted. It is arguably out of touch and undeniably eccentric.

None of these issues dull my appreciation for Unicorn Store, although I have to admit that I’m biased. I’m a fan of Brie Larson, and I also happen to like rainbows and unicorns. I may not be an art student, but I am an arts student, and Kit’s crippling fear of being a disappointment is one that resonates with me.

I’m convinced that Unicorn Store has charms that no whiny characters or questionable costume choices can shroud. Kit’s determination to pursue the things that make her happy, no matter what anyone else thinks, is nothing less than inspirational. And if that’s not concrete enough for you, may I offer the grounded and astute observation of Kit’s mom that “the most grownup thing you can do is fail at the things you really care about?”

At the end of the day, you should steer clear of this movie if you feel attached to realistic characters and clever plots, or if you’re not a fan of frivolousness.

If, on the other hand, you’d like some magic, playfulness, and a reminder that being grownup doesn’t have to mean growing up, give Unicorn Store a chance to convince you that anything is possible.