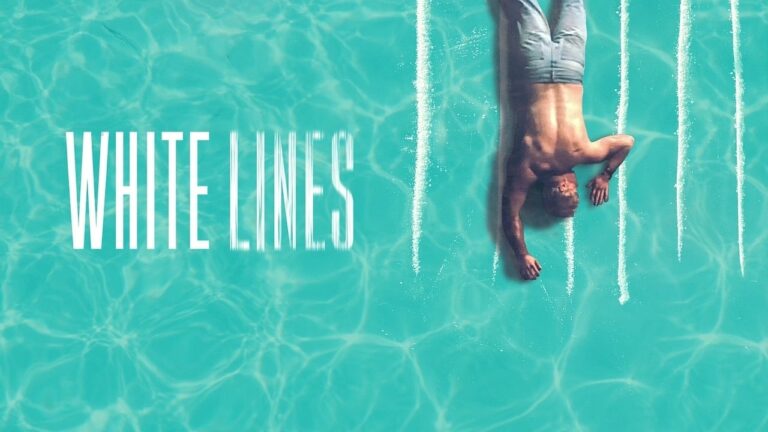 When Zoe Walker receives a call that her brother’s body has been discovered more than 20 years after his disappearance her decision to get to the bottom of his murder unravels her life and reveals a web of lies that spans decades. White Lines contain her, restrain her and entangle her as she inches closer to the truth of her brother’s life and death.

White Lines, the brain child of Alex Pina, is a mystery/thriller set in Spain that will keep you hooked from the opening scene to the last note of the closing credits. It is full of wild parties, criminal activity, sex, drugs, lies and regrets. It has family drama and high stakes business dealings. It is built on old grudges, tenuous peace and white-washed pasts. It also has a hefty dose of nostalgia for the thirty-something crowd with its frequent flash-backs to the mid-90s.

In 1996, after a few brushes with the law in the UK, Axel Collins (Tom Rhys Harries) leaves Manchester with a group of friends to pursue their dream of making it big as DJs in the nightclub scene of Ibiza. Despite his reluctance to leave his younger sister behind, Axel sees Spain as his only real chance of breaking free from his controlling father while stepping into his dream of making a living from making music. Within a few short years, Collins achieves everything he’d hoped for; fame, influence, love and money. He was at the top of his game when he disappeared during his 24th birthday celebration.

Two decades after he was last scene at his party, Axel’s body is unearthed in the Spanish desert and it is immediately clear that his death was not an accident. The Spanish authorities are limited in their ability to investigate due to the statute of limitations so it is left to those who were most affected by Axel’s disappearance, his sister, his friends and his business associates, to get to the bottom of his murder. As different people begin retracing Axel’s last days, each for their own reason, their paths and motivations cross and become enmeshed.

At the forefront of the search for truth is Axel’s sister, Zoe (Laura Haddock). In the years following Axel’s disappearance Zoe fell into a spiral of depression and self-harm that took her years to recover from. As she immerses herself in her brother’s life and relationships the small and contained life she had built for herself slowly begins to crumble around her. She if left with the decision to abandon her pursuit for justice for her brother or to move forward with her investigation at the cost of her family, her life and her very identity.

The story is a delicious mystery filled with deep character motivation and a twisting narrative that leaves the viewer constantly guessing who ultimately is responsible for Axel’s disappearance and death. The world of the ultra-rich collides with the cult-like popularity of nightclub scene to create an enticing back drop for this twisting tale of drugs, fames, music and love. White Lines is a binge-worthy series, to be sure.