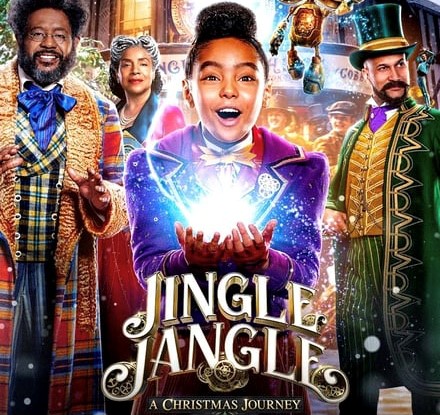 If you are looking for a new Christmas movie for your yearly watch list, this is the flick for you! This is more than a Christmas movie, it’s a magical delight that oozes colour and brilliance and heart throughout. So gather the family and immerse yourself in the spectacular world of Jingle Jangle: A Christmas Journey.

The story centers around an inventive toymaker, Jeronicus Jangle (Justin Cornwell/Forest Whitaker), who dreams of creating a truly revolutionary toy but needs one elusive element to make it all come together. When the missing piece finally arrives, and the toy comes to life, Jeronicus celebrates his coming success while his jealous apprentice, Gustafson (Miles Barrow/Keegan-Michael Key) conspires with the toy to steal Jeronicus’ notebook of ideas to strike out on their own.

In short order, Gustafson rises to fame on the back of Jeronicus’ inventions with his side-kick, Don Juan Diego (voiced by Ricky Martin), the toy Jeronicus brought to life. Meanwhile, Jeronicus loses his inspiration allows his once vibrant toyshop to become a dark and uninspiring pawnshop. After the death of his wife, Jeronicus sends his daughter, Jessica (Diaana BabnicovaAnika Noni Rose) away to spare her from his grief and despair.

Years later, Jessica sends her daughter, Journey (Madalen Mills) to stay with her father for a bit just before Christmas. While Jeronicus is grouchy and distant to begin with, his granddaughter’s creative mind and delightful demeanor soon turn things around and reignites his own creativity that sets him on a new path to reconciliation and inspiration.

The story is cute, a bit forced and rushed at times, but still a truly solid effort. But it is the music, dancing, sets and costumes that take this from a Christmas flick to a holiday spectacular. And don’t even get me started on the ridiculously talented cast! (I’m looking at you, Phylicia Rashad!)

John Legend signed on early as one of the producers and a song contributor, with Phillip Lawrence also contributing to the soundtrack and John Debney as composer. The songs are catchy and memorable but Jingle Jangle really comes alive with each musical number which features full cast dance numbers. If there’s something about this flick that reminds you of The Greatest Showman, it’s for good reason. Famed choreographer Ashley Wallen unleashed his skills all over this film and his contemporary style adds whimsy to this reimagined Dickensian aesthetic.

The costumes and sets are full of brilliant colours and textures that add an element of fantasy and eccentricity to the characters and feel of the film. Costume designer, Michael Wilkinson, intentionally crafted an image of “Afro-Victorian” style with his choices of contrasting patterns and vibrant colours while still maintaining an a modern appeal that reflects the diversity of the cast.

All of these elements come together to create a visually memorable spectacular that fills the screen with all of the magic, fantasy and hope of the season.