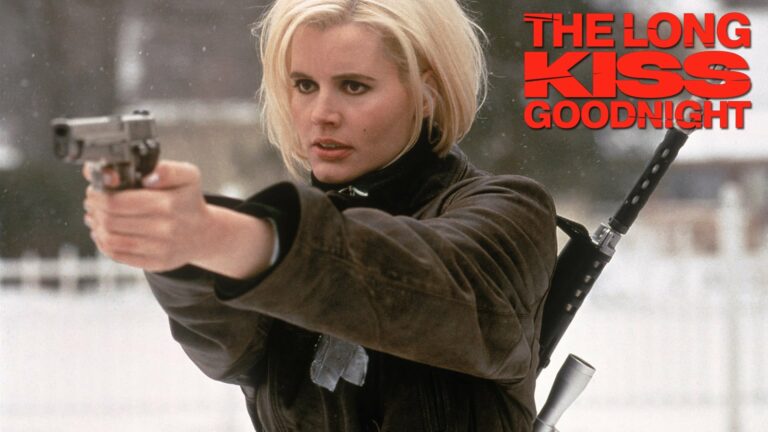 Though you may not find The Long Kiss Goodnight on a list of the top action movies of all time, I promise there is plenty to make this one a worth while watch. Not the least of these is seeing leading lady, Geena Davis, in action, literally.

Eight years after being found, washed up on a beach and pregnant, Samantha Caine (Davis) had settled into her life as a doting mom and school teacher. Well, mostly settled. Having suffered from amnesia since she was found, Samantha was on a constant quest to discover more about herself. She had already hired a string of private eyes and investigators but all had come up empty handed.

Something shakes loose after a terrible car accident. Samantha begins to have random flashbacks that provide little incite into her past. In fact, these choppy memories only leave her with more questions. When a particular set of skills begin to accompany these memories, Samantha hires yet another investigator to help piece together the puzzle.

Mitch Hennessy (Samuel L. Jackson) is not what you would consider a top-notch detective but he does have is connections. One of these connections leads to some vital information that not only sheds light on Samantha’s real identity but also launches her into the fight of her life against all sorts of powerful people who would much rather see her dead than see her full memory restored.

While there were some mixed reviews on the film upon its release, there was one unanimous thought; Geena Davis is brilliant. Her performance was strong, nuanced and a true highlight of the film. Sam Jackson, always a fan favourite, brings humour and a particular air of confidence that adds a fun dynamic to the film.

The Long Kiss Goodnight has become somewhat of a cult classic and is well worth the watch. See it now, on Netflix.