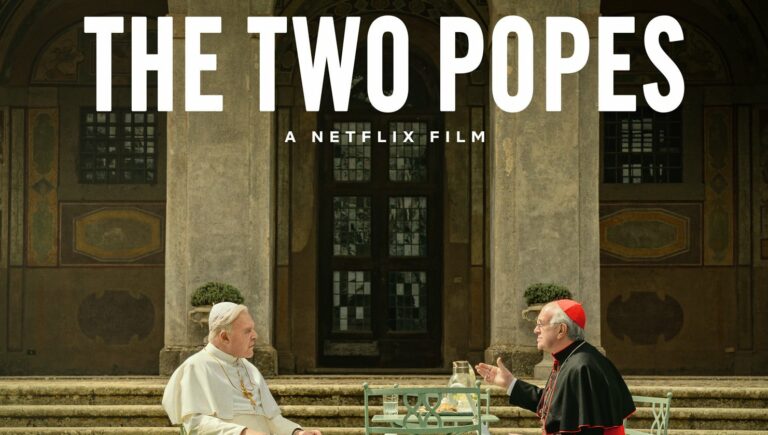 When incredibly popular Pope John Paul II died in April 2005, two men with opposing worldviews were both in consideration for the position of Pope. One, a traditionalist from Europe, the other, a man of the people from South America. One man campaigned for position and tradition while the other held conversations about the faith and the people the church was charged to care for. One became Pope and the other returned to his community.

Just 8 years later Pope Benedict XVI did something no other pope in modern times had done; he resigned his position. The Two Popes tells the story of Pope Benedict’s decision to resign and the unlikely friendship he developed with his once rival, Cardinal Bergoglio of Argentina.

Joseph Ratzinger (Anthony Hopkins) and Jorge Bergoglio (Jonathan Pryce) had very different paths to the Vatican, as portrayed throughout the film through flashbacks and character exposition. Ratzinger was an academic and a close advisor to Pope John Paul II. He had lived at the Vatican for more than 20 years before the 2005 conclave. By contrast, Bergoglio was an Argentinian cardinal who dedicated his life to living with and serving the poorest in his community after missteps during Argentina’s political troubles of the 1980s.

When Bergoglio eventually decided to retire as Archbishop he traveled to Rome to hand deliver his resignation to Pope Benedict. Instead of accepting his resignation, Pope Benedict engaged Bergoglio in a series of conversations where a deeper understanding of each other grew. They talk of leadership, faith, personal history, church politics and the reality of God. A gentle respect and trust developed between the two men and Pope Benedict eventually confided his own plans of retirement and his hopes for Bergoglio to become the next pope.

Under director, Fernando Meirelles’ watchful eye, Hopkins and Pryce each give a brilliant performance in this film adaptation of Anthony McCarten’s play The Pope. How they volley back and forth in conversation, as much with their words as with their body language is masterful. They each bring humanity to their own characters and convey a deep respect for the other through subtle gestures and meaningful pauses. Hopkins brings a level of openness and vulnerability that was rarely seen in the public life of Pope Benedict while Pryce reflects the humility and gentleness that Pope Francis is known for.

The Two Popes won several awards and has been popular with both critics and fans with reason. Its subtle, beautiful storytelling is played out on screen by two masters of their craft. Its content is interesting and its method of storytelling is captivating. The cinematography is the third character in this drama and adds structure and depth to the struggle of faith and humanity that both Ratzinger and Bergoglio wrestle with.

The Two Popes is filmmaking at its finest.