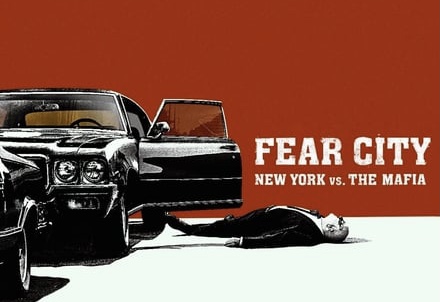 The stories of the New York City Mafia are nearly as old as the city itself.  The mob has been at the center of dozens if not hundreds of movies, television series and documentaries over the decades. They have been portrayed as the bad guys you love to hate and hate to love. And somehow, despite the crime and terror they rained down on the city for decades, these crime families and their bosses have become the stuff of legends. Fear City: New York vs The Mafia breaks down the how and why of the Mafia’s rise to power and eventual demise of this brand of organized crime in New York City.

Fear City opens in episode one with archived news footage from the 1970s when the Mafia’s grip on the city was at its peak. Muggings, murders and violence were the norm as the Mafia bosses of the five major crime families (the Bonanno, Lucchese, Gambino, Colombo and Genovese families) duked it out for dominance of the city’s drug and gambling trade. Due to the constraints of the law, it looked like the Mafia was untouchable until the early 1980s when a new investigation opened on the mob using RICO as its backbone.

The RICO (Racketeer Influenced and Corrupt Organizations) Act became law in 1970 and provided the elements law enforcement needed to close the loopholes that allowed organized crime to flourish in that era. Primarily, RICO allowed for the prosecution of those who ordered crimes to be committed, even if they were not hands-on involved in the crime itself. RICO also allowed law enforcement to link individual crimes together to form a more complete understanding of how organized crime families operated.

The FBI began in-depth surveillance of the five major crime families. They developed a network of informants, under cover agents and wire-tapping to build a mammoth case against the bosses of each family. Fear City breaks down the structure of the families, the techniques of the FBI investigators and the mountain of evidence compiled throughout the investigation. Unprecedented steps were taken to build not one, but five squads to investigate and collaborate during the years long investigation into the practices and crimes of the mob. And in the end, the efforts of the FBI and local law enforcement paid off and one by one the Mafia families, and Mob controlled organized crime, fell.

Although there have been dozens of movies and documentaries about the Mafia, Fear City is a stand-out for the quality of research and contributors to this documentary. This story unfolds in three information-packed episodes that include a mesh of wire tap recordings and current interviews from informants and agents who were involved in the original investigation. Surveillance photos and family map graphics aid in the understanding of just how intricate these organization of these crime families were.

I am a bit of a mob-junkie. I have always been intrigued by the power the Mafia amassed and how they were brought down by the diligence of law enforcement and cooperation of informants.  I have consumed more books, movies and documentaries on this topic than I can remember and Fear City ranks among the best, in my opinion. One of the most interesting additions to this docu-series that I have not seen before is commentary from the investigators detailing how they felt during the investigation. Confessions of curiosity, awe and connection to mobsters bring a level of humanity and relationship to the investigation that I have never considered before.

The only crime Fear City: New York vs The Mafia commits is cutting things too short. With only three well-paced episodes, this docu-series leaves the viewer wanting more. A fourth episode to wrap up the court case and aftermath would have made a great series a perfect series. Perhaps Netflix will consider a second season to further unpack the impact the mafia had on New York City.