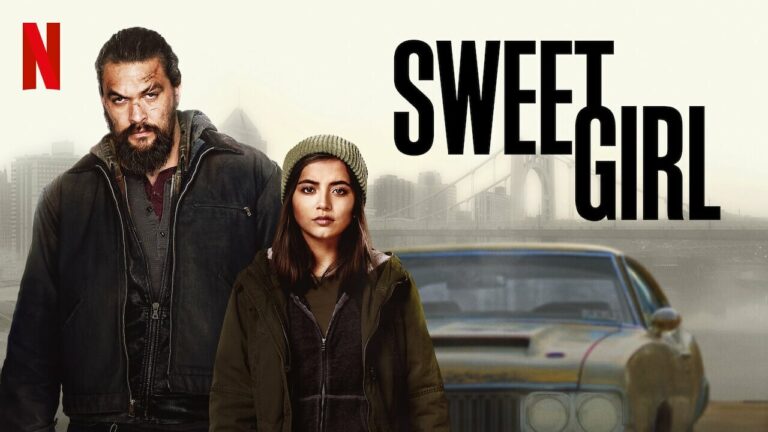 Jason Momoa in an action flick playing a grieving husband bent on revenge – yes please! Sweet Girl is Momoa’s latest action offering and it is everything we’ve come to expect from the popular action star and more!

Ray Cooper (Momoa) is a loving husband and father. His wife Amanda (Adria Arjona) becomes ill with cancer and her health declines quickly. The doctor offer Ray, Amanda and their daughter Rachel (Isabela Merced) a glimmer of hope when he suggests that a generic drug that is waiting FDA approval may be the answer they were waiting for. Just days later the drug is pulled from production and Amanda eventually dies.

Overcome with grief and overwhelmed by medical debt, Ray is convinced that the pharmaceutical company is to blame for his wife’s death. As he begins to research the connect between Big Pharma and the government he finds himself pulled into a convoluted web of pay offs, cover ups and profits at any cost. It becomes clear to him that he is the only one working to connect the dots and throw light on the shady world of government lobbyists.

Ray risks it all to get vengeance for the loss of his wife. The closer he gets to discovering who is ultimately responsible for causing his wife’s death the more perilous his situation becomes. He’s not entirely alone in his pursuit though. His young daughter, Rachel, is watching and learning and following in his footsteps … right to the end.

Sweet Girl has some terrific action sequences but the plot is a lot to sort at times. It trods along, quite heavy-handed at times, yet still manages to surprise and delight us. There are moments that are tender and sweet and heartbreaking in the midst of some of the most intensely physical action sequences out there. There is also a major plot twist that pops up most unexpectedly.

Momoa, for his part, is wonderful. He displays a full range of emotion and delivers a scene of a man wrecked by grief with a level of authenticity that is sure to draw a tear or two from even the most cynical viewer. As expected, his action sequences are spot on but his moments of subtle emotion are a hint at untapped talents that is truly exciting to contemplate.

Sweet Girl is a sweet watch for fans of Momoa. And as an action flick its a decent offering and well worth the time. Be sure to check it out, streaming now on Netflix.