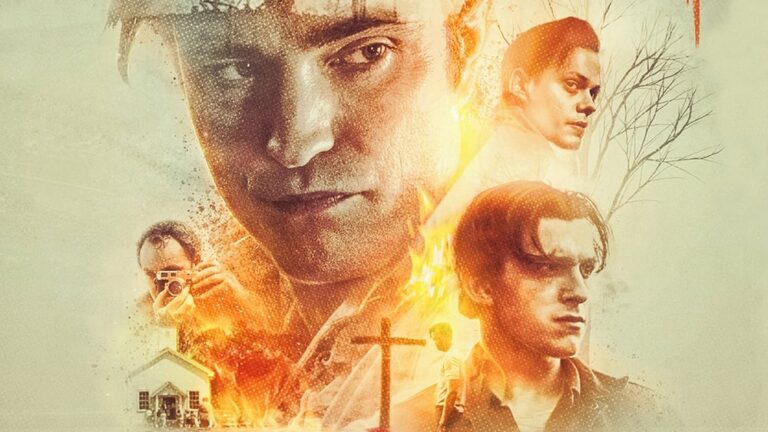 The Devil All the Time is so full of story, themes, and character arcs that it seems impossible to do it justice in one review.

Antonio Campos directed this film, which was based on the novel written by Donald Ray Pollock. The Devil All the Time boasts such cast members as Tom Holland, Bill Skarsgård, Riley Keough, Robert Pattinson, and Sebastian Stan, to name a few. With excellent writing, incredible acting, and gorgeous cinematography, this film is a cinematic treat.

Of course, it’s also dark, gritty, and compelling. (Heavy on the dark and gritty.) There’s a lot of violence and I thought the story was just plain depressing.

(I’m telling you this now so that if any of that sounds unappealing, you leave now. If it doesn’t sound unappealing, then welcome to this review!)

The Devil All the Time tells the story of Arvin, played by Tom Holland. Arvin has not had an easy life. His father, Willard (Bill Skarsgård), is a veteran of World War II. As you would probably expect, Willard is carrying around quite a bit of trauma. When his wife gets sick, his trauma expresses iself in extremely unhealthy ways. As he watches his father navigate life, Arvin thinks that “his daddy fights the devil all the time.” (Nice title drop, eh?)

After witnessing way more death than any nine-year-old should see, Arvin ends up living in his grandma’s house. He grows up alongside his cousin Lenora (Eliza Scanlen). They live more or less happily until Preacher Preston Teagardin, played by Robert Pattinson, replaces the retiring preacher of the local church. After that, things get dark and dismal very quickly. Characters look out for number one, and there is death and destruction everywhere you look.

This story is about being wronged, finding revenge, generational trauma, and what it means to be your father’s son.

Tom Holland’s performance as Arvin is outstanding. He’s a very sympathetic character, although I wonder if that has something to do with contrast.

Other characters — Sebastian Stan’s Lee Bodecker, the morally ambivalent cop; Robert Pattinson’s corrupt preacher; Jerry Clarke’s homicidal Carl — offer a grim backdrop, against with almost any character with an ounce of likeability would look appealing. Add to that Holland’s charisma, and Arvin is impossible to dislike.

I am not trying to besmirch Arvin — far from it! He is a wonderful character. And yet, he is also deeply flawed. The film explores morality quite a bit.

The Devil All the Time is filled to the brim with characters that are simply trying to survive in a cruel and uncaring world. It’s a bit depressing, but then again any movie dealing with that kind of frantic and disheartening theme would be depressing. The fact that The Devil All the Time also offers great acting, good writing, and nice scenery makes it a worthwhile watch if you’re okay with some existential dread.