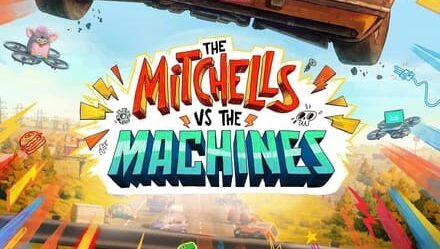 Everyone’s embarrassed by their family, but the Mitchells might actually be the most embarrassing family ever. Or they might be just like the rest of us. Who can say?

The Mitchells Vs. The Machines is a sugary-sweet and ultra-funky family film. And when I say family, I mean for families and also about families! Think The Croods, but in a robot apocalypse.

Katie Mitchell (played by Abbi Jacobson) feels entirely out of place. No one gets her, and she feels entirely alone. So when she gets accepted to film school, she’s ready to go and find her people.

Rick does not understand Katie. At all. He loves her and he wants to make her feel seen but he has no idea how to do that. It’s heartbreaking to watch, and painfully relatable for anyone that has been part of a family.

But hey, maybe the Mitchells can connect with each other when they get attacked by man-hating robots! Right?

Maybe. You’ll have to watch it to find out.

I have a hard time thinking of things not to love, but that might be because this movie slotted perfectly into my niche interests. I love weird things, and this movie has a lot of them.

Phil Lord and Christopher Miller, who collaborated on the LEGO movie, produced this movie. You can feel their influence in the side-splitting and also strange visual gags they chose to go with. Also, Olivia Colman plays the robots’ evil leader. And the Kill Bill theme is right at home in this movie, alongside videos of screaming monkeys. So much stuff is straight-up weird and I love it.

And visually, this one is pretty darn cool. The animation is blocky and unique. The character designs are fun. The action sequences are exciting to watch. (Have you ever wondered what murderous Furbys would look like? Wonder no more.)

Emotionally speaking, this is a roller coaster. I cried thirteen minutes in and I had to pause because I was laughing so hard. The laugh part is because this film is funny. The cry part probably has something to do with being a “creative” oldest daughter that struggles to connect with her dad sometimes.

And yet, no matter what our familial background, I think that most of us could probably relate to this movie. Being part of a family is hard. We love the people that surround us, but they drive us crazy. We want to squeeze them in a hug, but we also want to scream at them.

The Mitchells Vs. The Machines gets that. They don’t offer a magical solution, but they offer an hour and a half of chaos and emotions that assure you that you’re not alone and even if you’re weird, you can still be great.