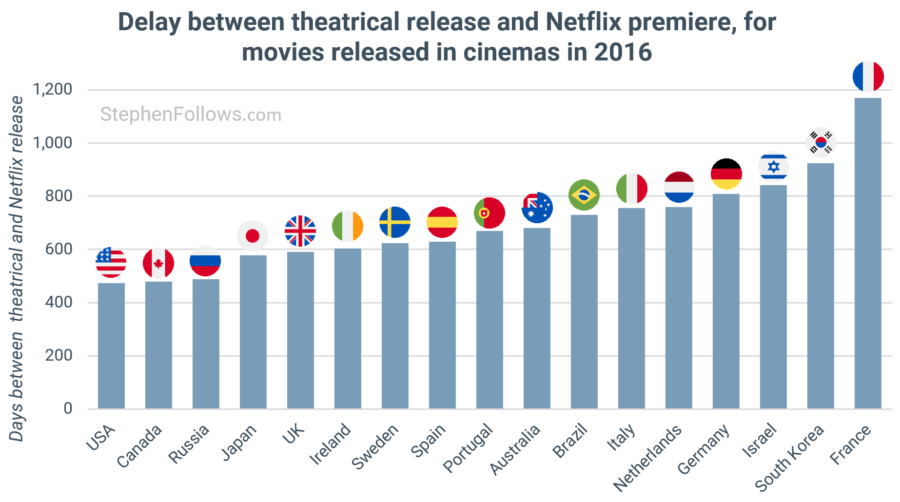 After you see a great movie in the cinema, then comes ‘the wait’. The never-ending stretch before you can re-watch it again and again to your heart’s content on Netflix.

The better the movie, the longer this wait feels, but how long is it actually? We turned to the data to find out.

Let’s start by answering this question narrowly, and then moving out to look around the world and over time.

In the US, there were 174 films which were released in cinemas during 2016 and which ended up on Netflix. The average delay across those titles was 474 days – i.e. just over a year and three months.

If we widen the focus to cover films in sixteen other major countries, we now include 258 films which were in cinemas during 2016 and then on Netflix in the same country. None had a shorter delay than the US. Some were very similar (Canada had a delay of 479 days and Russia 487), while others had a much longer delay (924 in South Korea and a whopping 1,170 in France).

How has this changed over time?

Let’s widen the study further, to cover four years worth of releases. As the chart below shows, the delay in the US has fallen slightly, with the delay dropping by 104 days between 2013 and 2016.

This decline is found in every country I studied, albeit to varying degrees.

This trend mirrors two patterns we see elsewhere in the film business over the past decade.

The first is the delay between theatrical and Home Entertainment releases (i.e. DVD and iTunes). The chart below shows the situation in the US, with a steep decline between these two “windows of release”.

The studios are pushing for shorter windows but are being fought by cinema operators who fear the loss of exclusivity will damage ticket sales. The COVID-19 pandemic allowed the studios to make further headway. While the cinemas were distracted and powerless, Star Wars 9, Frozen 2, and The Invisible Man were among the titles released on home platforms faster than expected.

The other trend which today’s data echos is the increased synchronisation among international theatrical release dates. In the 1990s, it would not be uncommon for a film to be released in intentional cinemas over a year after it’s initial run in US cinemas. However, digital distribution, online privacy and social media marketing have all pushed studios to reduce this delay, moving closer to having a global release date.

The business models of studio and cinemas were formed in the practices and economics of the twentieth century, whereas Netflix is very much a modern Silicon Valley operation. This means they think globally and are pushing for greater international synchronisation of content.

Today’s research is looking at 1,257 live-action feature films which were released in cinemas between 1st January 2013 and 31st December 2016 and which ended up on Netflix in at least one country. Theatrical release dates were from IMDb and Netflix release dates from What’s New On Netflix.