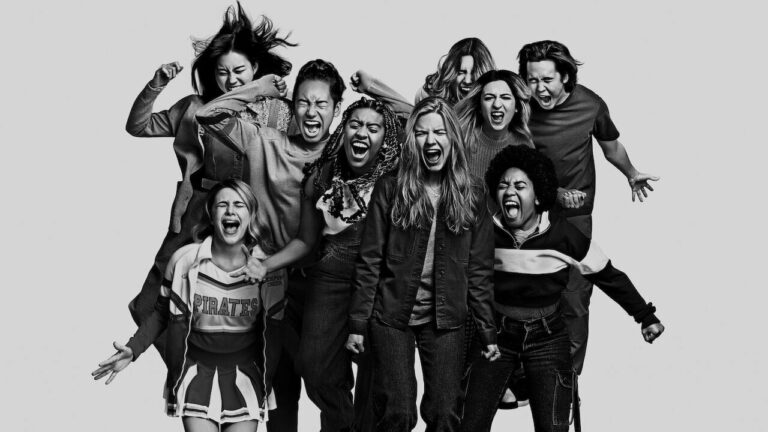 Remember in fourth grade when you would start an essay with “the dictionary defines so-and-so as blahblahblah?” That’s what I’m going to do here, because the title of Amy Poehler’s movie is kind of important.

“Moxie” is defined as “nerve, spunk, and strength of character.” An intense word — kind of action packed. You’d think a film named after such a strong word would match the intensity, or at least I did.

And I wasn’t completely mistaken. Moxie was good! There were a lot of things it did right (more on that later), and yet I still liked it instead of loving it.

But I’m getting ahead of myself here.

Moxie is the story of shy, quiet teen Vivian (Hadley Robinson) who feels voiceless, powerless, and believes that keeping your head down is the only way to get through high school. This changes when new student Lucy (Alycia Pascual-Peña) stands up to the school bully. Vivian is struck by this show of bravery and self-confidence, and mentions it to her mother (Amy Poehler), only to learn that her mom spent most of her teen years protesting the patriarchy.

Inspired by the courageous women in her life, Vivian creates and anonymously publishes a zine called — you guessed it — “Moxie.” The zine has unforeseen consequences, and leaves Vivian struggling to balance the feelings and failures that come with taking risks.

Why It’s Not Great

My biggest problem with the film was that the acting felt like acting. I cringed a few times. Vivian seemed pretty one-dimensional for a lead character. Characters were either overwhelming or underwhelming. Also, what is it with high school movies and the entire school turning up to the football game?

That being said, Moxie is far from outright bad.

I was excited by how intersectional the film was. There were girls of all kinds, and they didn’t all look the same. There were shy girls, outgoing girls, girls with disabilities, trans girls, girls who wanted to fight and girls that wanted to stay back and stay safe. No movie does this perfectly, but I thought Moxie did better than most. Well done, Amy Poehler!

The film packs a punch. Women working together to carve out a space for themselves always gets me excited, and it’s even more fun when they’re in high school. Teenagers recognizing that they deserve respect and making sure that they get it? Amazing. (I spent most of my high school life hiding in my room and saying “yes sir” to authority figures, so this is extra exciting for me.) The soundtrack was great, I sympathized with the characters even if they were kind of wooden, and by the end I was shouting happily at my screen. “You go, girls!”

To Watch Or Not to Watch?

Despite the fact that the acting feels like acting, Moxie is a real, thoughtful look at sexism in the school system, and in general. If you want a girl power movie and you’re willing to put up with some less-than-perfect acting, Moxie is worth the watch.