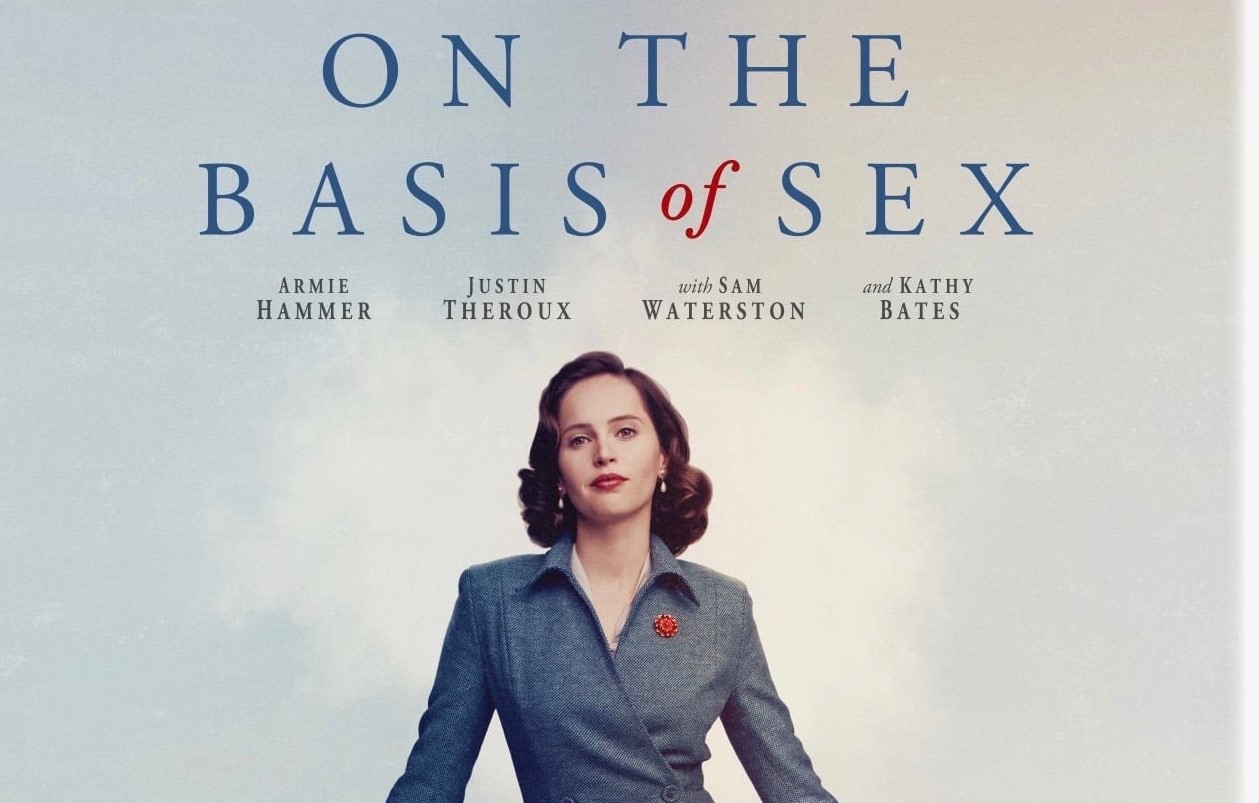 On the Basis of Sex takes a larger than life legend and presents her life onscreen as a beautiful tribute to the passion that fueled her throughout her barrier- breaking career. This is the story of Ruth Bader Ginsburg, the early years.

Before she was Notorious RBG, a Supreme Court Judge or a warrior in the legal battle for equal rights she was plain Ruth Ginsburg, wife, mother and first-year law student. She joined Harvard Law School after completing her bachelor’s degree at Cornell. A young wife and mother but determined, nevertheless, to earn her degree and practice law.

What she didn’t factor into her carefully laid plans was her husband falling ill with cancer during his second year of Law School. This didn’t derail Ruth. She just dug in and made things work – for both her and her husband. Ruth took her courses, and his, and transcribed both of their notes, scribed his papers, wrote hers and still mothered her daughter. It couldn’t have been easy but Ruth saw it through.

In her final year of Law School, her husband, Marty, had graduated and found a job in a promising firm. Ruth had to choose between her education and her family. Because she was a woman, her professors expected her to settle in to being a wife but she was determined as ever to complete her degree and she did.

Upon completion of her degree, she experienced a continued stream of discrimination on the basis of her sex. Rather than, letting the discrimination deter her she rose to the occasion and found a way to take on the establishment. On the Basis of Sex is the tale of how the law student became the legal voice of her generation – and ours – on gender discrimination.

This movie is inspiring and uplifting while putting into context the struggle that women faced just 50 and 60 years ago. Felicity Jones embodies the strength, intelligence and bravery of RBG while still allowing her to be human. The chemistry she has with Armie Hammer is lovely to see as the two depict the lifetime love and partnership Marty and Ruth shared.

Written by Ruth’s nephew, Daniel Stiepleman, On the Basis of Sex is, by all accounts, an accurate representation of Ruth, Marty, their relationship and Ruth’s path to the Supreme Court. Despite some criticism of one particular scene where Ruth challenges a judge by stating that the U.S. Constitution does not contain the word ‘freedom’, overall the film was met with praise and interest from audiences and critics alike.

On the Basis of Sex is beautiful and inspirational film that will elevate you and challenge you while still being entirely entertaining.