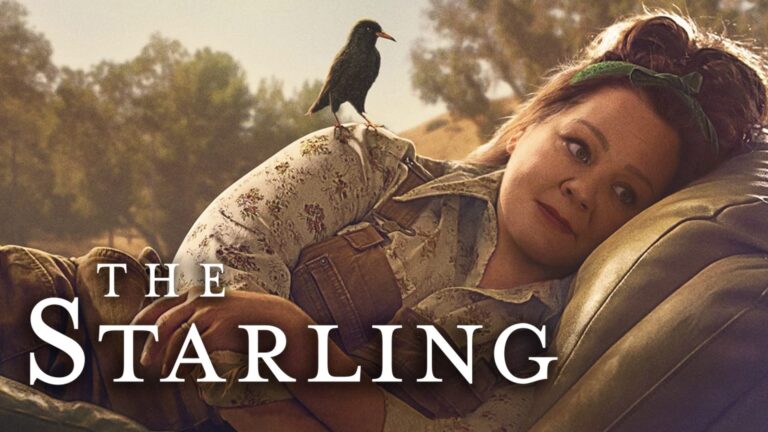 Following the sudden death of their infant, Jack and Lilly Maynard struggle to hold on to their sanity and to each other as they find their way forward. In the midst of learning to live again, a wee bird becomes the key to the couple finding their way back to each other. This is The Starling.

While Jack (Chris O’Dowd) recuperates in a mental health facility, Lilly (Melissa McCarthy) struggles to find herself again as she grieves. Work, at the local grocery store, is nearly overwhelming for her so she strives to simplify her home to regain some sense of control. In the midst of reclaiming her space at home she finds herself at odds with a persistent little bird. The starling sets up camp in Lilly’s tree and, in the end, reminds her that life is still full of possibilities and hope.

Melissa McCarthy gives the best of herself in this Matt Harris dramatic comedy. She is funny and earnest and so full of grief that it breaks your heart to watch as she brings Lilly Maynard to life. Through heartache and hilarity, McCarthy works her magic and fills her performance with such authenticity that recalls some of her very best performances.

The minor players in the cast are embodied by some of the finest actors going these days. Daveed Diggs, Timothy Olyphant and Kevin Kline all provide worthy performances for the leads to play off of. They each, in their own way, bring life and light to this endearing tale.

All in, this is a beautiful and quirky tale of resiliency and love that will evoke a wide range of emotions and, in the end, bring joy and hope to the surface. The Starling is a wonderful watch. Don’t miss it.