How to watch Derren Brown: Apocalypse and Fear: Season 1 (2012) on Netflix Australia!

Yes, Derren Brown: Apocalypse and Fear: Season 1 is now available on Australian Netflix. It arrived for online streaming on November 30, 2018. 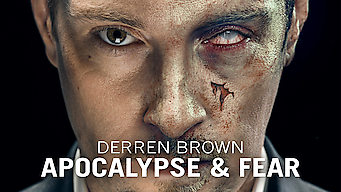 The mentalist takes mind games to a new level, persuading the public to believe in a zombie apocalypse, a fear-ending drug and a higher power. This is not a test. This is an illusion. One that may bring out the best in you. Or the impossible.

Season 1 of Derren Brown: Apocalypse and Fear has 4 episodes. Because different Netflix countries have different availability for episodes, you'll need to check the episode listing below to see which are available in Australia. Derren Brown embarks on a radically ambitious project: He convinces a self-absorbed young man that meteors and then zombies have devastated the Earth. Intent on honing his entitled subject's leadership skills and sense of compassion, the mentalist creates a world fraught with end-time challenges. The placebo effect is the focus as Derren Brown stages a trial of a fictitious, fear-inhibiting drug called Rumyodin and follows the test subjects. The illusionist explores the psychology of religious belief with a series of experiments. He then attempts to convert a staunch atheist.

Escape to the Country Collection