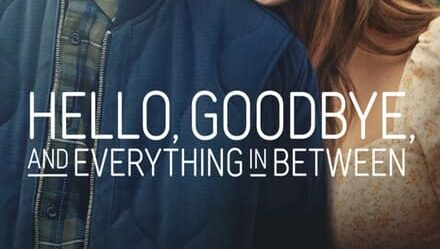 Hello, Goodbye, And Everything In Between (2022) – Review

Hello, Goodbye, And Everything In Between is a high school rom-com. It’s based on a novel of the same name which was penned by Jennifer E. Smith. I can’t speak for the book, but I thought the movie was adorable.

Written by Amy Reed and Ben York Jones, Michael Lewen directs this feature which is about teens in love trying to get out of it.

Clare (Talia Ryder) is nervous to get into a relationship. She’s moved around for most of her adolescence, and she’s watched her parents’ marriage disintegrate. Even so, when cute, quirky, hilarious Aidan (Jordan Fisher) asks Clare to date him she agrees — on one condition. She wants to break up before both of them leave for college.

No problem, says Aidan. They make their pact and then they dive into their relationship headfirst. Their “being together” montage is nothing new or innovative, but what comes after is. I’ve never seen a “last date” before, but most of the movie is centered around one. Before they even started dating, Clare and Aidan agreed that before they broke up they’d have a last date. This is the titular “goodbye,” the last hurrah of a teenage relationship.

As the night progresses, Clare starts to second-guess her plan. She loves Aidan, and she knows that he loves her. Is this really the best choice to be making? What if she’s throwing away the best thing she’s ever had?

I can’t answer these questions for you, because of spoilers, but I will say that I was pleasantly surprised with the way the film handled them.

As a general rule, critics don’t seem to be a fan of the movie. I respect their expertise but I liked it just fine, and I’ll tell you why.

Talia Ryder and Jordan Fisher do a pretty good job in their leading roles. I sometimes find myself wanting to shut the TV off when I’m watching movies about teenagers. There were still some moments that made me wince, but Clare and Aidan are mostly likeable. That’s a win!

And then there are the stellar supporting characters. Nico Hiraga of Moxie plays Aidan’s best friend, who is constantly getting suspended and also somehow owns a boat. Stella, played by Ayo Edebiri, is Clare’s bestie since childhood, and she offers some great advice and some truly impressive comic relief. I laughed out loud a few times, which I don’t always do when a movie is trying too hard to be funny. Way to go, Ayo!

It’s always fun to fantasize about “the one that got away,” and this movie feels like it’s trying to do exactly that… before the one gets away. It’s an interesting concept, and it leaves you thinking about the nature of relationships. And love. And friendship. You know, just simple little things.

I really enjoyed Hello, Goodbye, And Everything In Between. The movie is about exactly what the title says, there were cool design choices, and I smiled and cried. Maybe its cringe, but its also cute.